Acyl homoserine lactone signaling in members of the Vibrionaceae family 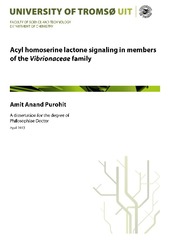 Bacterial cell to cell communication, which involves regulation of gene expression in response to cell density, is defined as Quorum Sensing (QS). In QS small molecule signals are produced, which regulate their own production and are defined as auto-inducers. These signals are received by receiver proteins and in response certain genes are regulated directly or indirectly by these receiver proteins. Acyl-homoserine lactones (Acyl-HSLs or AHLs) are one of such signaling molecules produced mainly by Gram negative bacteria. We modified an existing liquid chromatography and mass spectrometry method for the detection of AHLs and detected 15 different AHLs, differing in number of carbons of the acyl chain and the third position functional group. In total, 57 different Vibrionaceae family members were screened for AHL production, comprising of Aliivibrio, Photobacterium and Vibrio strains. Many bacteria produced multiple AHLs and when mapped on a phylogenetic tree generated on the 16 rRNA gene sequences of the bacteria, it revealed an evolutionary relationship between similar bacteria and AHLs produced by them. This method was used to analyze the QS system of a Salmon fish pathogen Aliivibrio salmonicida LFI1238 where many mutants of genes involved in QS were created in the bacteria to study the influence they have on AHL production. Two synthases were identified (LuxI and AinS) and it was found that LuxI was responsible for making seven AHLs and AinS produced only one. It was also revealed that the A salmonicida has a cold adapted QS system as the signal production decreased from 6°C to 16°C. Further, an AHL synthase VanM from another fish pathogen Vibrio anguillarum NB10 was recombinantl expressed and purified and its substrate specificity was analyzed by studying the rate kinetics of different substrates. It was observed that the enzyme VanM has a C6 acyl chain length preference along with a hydroxyl group substitution at the third position.