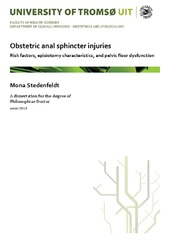 Obstetric anal sphincter injuries (OASIS) are well known and serious complications of vaginal delivery. The incidence in Norway increased from below 1.0% in the 1960s to 4.3% in 2004. As a consequence a national strategy to reduce the number of OASIS was initiated by the Directorate for Health and Social affairs/National Advisory Committee for Obstetrics. As a part of this strategy an interventional programme primarily focused on perineal support during the final part of second stage of labour was conducted at five hospitals in total. After the interventional programme the OASIS rate fell from 4-5% to 1-2%. The role of episiotomy has been subject for debate. Different techniques have been differently associated with increased risk of OASIS, and consensus is lacking regarding the role of mediolateral episiotomy. OASIS is, in addition to anal incontinence (AI), associated with urinary incontinence (UI) and sexual problems. Episiotomy is identified both as a risk factor and protective factor for OASIS as well as an independent risk factor for postpartum AI and sexual problems. The main aims of this PhD project were: to evaluate and compare the risk profile of sustaining OASIS after the OASIS rate was reduced from 4.6% to 2.0% following an interventional programme in four of the five hospitals and to investigate associated risks in five risk groups (low to high). Also, to investigate the association between the geometrical properties of episiotomies and OASIS and, and lastly to investigate AI, UI, and sexual problems in two groups of primiparous women with episiotomy, comparing women with and without OASIS, and assess associations between episiotomy characteristics and the dysfunctions: AI, UI, and sexual problems. In total, 40 154 vaginal deliveries in 2003-2009 were included in this multicentre interventional cohort study with before and after comparison. In a case-control study we compared two groups of women. Seventy-four women with episiotomy were included. Cases (n = 37) had sustained OASIS at birth, while controls (n = 37) had not. The episiotomy scar was photographed, and relevant measures taken. All women were scored for AI, UI and sexual problems by St. Mark’s scoring-tool and self-administered questionnaires. After the interventional programme the most significant decrease (65%) in OASIS was observed in low-risk births. The main risk factors for OASIS remained unchanged being 1st vaginal delivery, high birth weight ≥ 4500g, and forceps assisted delivery. We found that scarred episiotomies with depth > 16 mm, length > 17 mm, incision point > 9 mm lateral of midpoint and angle range 30–60° are significantly associated with less risk of OASIS. However, shrinkage of tissue must be considered. Lastly, women with OASIS had more AI and sexual problems. There was no association between episiotomy characteristics and dysfunctions except between episiotomy length and sexual problems in women without OASIS.