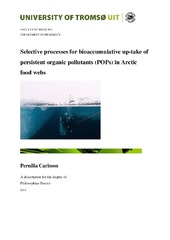 The overall aim of the present study was to elucidate selective environmental up-take processes in Arctic food webs that lead to the bioaccumulation of persistent organic pollutants (POP) in food items consumed by Arctic indigenous people. In addition, this study aimed to increase the scientific understanding of the principles behind climate change related influences on transport processes of contaminants. Svalbard and Nuuk, Greenland were chosen as study areas since they represent Arctic conditions, e.g. glaciers, different marine water masses, long-range transport of POPs and few local sources of POPs. In addition, Greenland has a large population of indigenous people consuming traditional food on a daily basis. This thesis is based on field campaigns and empirical data. Legacy pesticides were analysed in water samples from a Greenlandic fjord (paper I). The pesticide distribution indicated that glaciers and snow caps around the fjord are secondary sources of contaminants for the coastal marine environment. Chlordanes were identified as potential indicator compounds for meltwater runoff (paper I). α-hexachlorocyclohexane (α-HCH), trans-, cis- and oxychlordane were chosen for enantiomer selective analyses in zooplankton from Svalbard and Greenlandic traditional food items (paper II, III). The enantiomeric fraction (EF) of α-HCH in the zooplankton was associated to ice cover/break-up. EFs of cis-chlordane were reflected in the deviation from racemic EF among oxychlordane. Chiral pesticides and enantiomer selective analyses are recommended for further studies regarding their potential as marker for changes of the physical environment (paper II). Non-racemic EFs were detected for almost all food samples. Hence, species specific distribution exists, and can be an important factor in future dietary advices. Levels of polychlorinated biphenyls (PCB), polybrominated diphenyl ethers (PBDE), perfluorinated alkylated substances (PFAS) and pesticides were below tolerable daily intake threshold in the food items (paper III, IV). PFAS was detected in the marine mammals, but not in the fish samples, most likely due to industrial processing of the fish (paper IV).