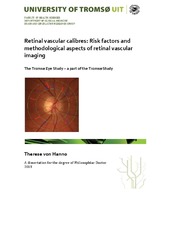 Cardiovascular disease is a major cause of death and morbidity in developed countries. The eye offers a unique window to the study of the microvasculature in vivo, which has been less investigated than the macrovasculature. We wanted to investigate the relationship between the traditional cardiovascular risk factors and retinal vascular calibres. Further, iron is a proposed cardiovascular risk factor and we wanted to investigate whether measures of iron stores and hemoglobin are related to retinal vascular calibre. The two first papers in this thesis are based on data from the Tromsø Study. We have measured the diameter of the retinal arterioles and venules on retinal images from 6353 participants of the sixth survey of the Tromsø Study (Tromsø 6, 2007-2008). We found that blood pressure and smoking were the factors with the most pronounced effect on the retinal vascular calibre. Blood pressure and age were associated with narrower retinal vessels and mainly affecting arteriolar calibre. Smoking, overweight (body mass index) and unfavourable lipid-profile were associated with wider retinal vessels, mainly affecting venular calibre. The effect of low HDL cholesterol and high BMI with venular widening was significantly stronger in men than in women. Further, 2993 participants with retinal vascular calibre measurements in Tromsø 6 also participated in the fifth survey (Tromsø 5, 2001-2002) when measurements of iron stores (serum ferritin and transferring saturation) and hemoglobin were performed. Men have higher levels of both iron stores and hemoglobin. We found that serum ferritin was associated with wider retinal venules in men. Hemoglobin was associated with wider retinal venules in both men and women. Cameras used for retinal photography commonly use light in the visual spectrum for the imaging technique and include several exposures with flash illumination to capture different fields of the retina. We examined 32 healthy volunteers and found that retinal venular calibre increased during an image sequence of 6 images and that the venular calibre was wider after light exposure compared to dark exposure before imaging.