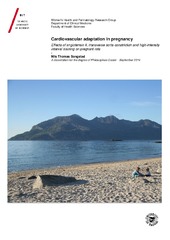 Objectives: To investigate how cardiac function, remodeling and gene expression are affected in pregnancy in response to cardiovascular stress, to detect possible adverse effects on the fetus, and to evaluate if coronary endothelial function is influenced by pregnancy and increased cardiac afterload. Methods: Pregnant and non-pregnant rats were subjected to chronic AngII-infusion, transverse aortic constriction (TAC) or high-intensity interval training (HIIT) in three separate studies. Echocardiography was used to evaluate maternal heart function. Doppler signals from the left coronary artery was used to asses coronary flow reserve (CFR) using 3.5% inhaled isoflurane as a vasodilating agent. Blood pressure and left ventricle (LV) pressure and volume were measured invasively using a conductance catheter placed in the LV. Histological sections of the maternal LV were used to determine collagen content, vessel density and myocyte size. RT-PCR was used to quantify the gene expression in maternal myocardium and fetuses. Level of oxidative stress was measured in fetal tissue in the HIIT-study. Results: Chronic AngII infusion resulted in increased myocardial collagen content, and pregnancy reduced this effect. A decrease in LV vessel density following AngII infusion was less severe in pregnant rats. Calculated stroke work in pregnant TAC rats was double compared to pregnant shams, whereas it was not significantly increased in non-pregnant TAC rats compared to non-pregnant shams. The ratio of β-MHC to α-MHC expression was higher in pregnant compared to non-pregnant TAC. HIIT did not alter maternal cardiac structure or function, fetal growth or level of oxidative stress in the placenta or fetuses. There were no differences in CFR between rats with increased afterload (AngII or TAC) and controls. CFR was lower in pregnant compared to non-pregnant rats. Main conclusions: Pregnancy was protective against fibrosis and preserved angiogenesis in AngII infused rats. Increased afterload following TAC was less tolerated in pregnancy. CFR is reduced in late pregnancy. HIIT is feasible and well tolerated by pregnant rats and did not induce significant changes in the fetus.

Paper a and c of the thesis are not available in Munin:

a: 'Pregnancy protects against antiangiogenic and fibrogenic effects of angiotensin II in rat hearts', available in Acta Physiologica 2011, 201, 445–456