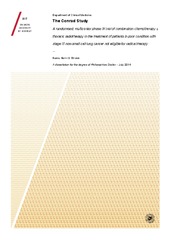 The thesis constitutes the collected report on an RCT the candidate has conducted on behalf of the Norwegian Lung Cancer Study Group. In addition to three scientific articles published in international peer-reviewed journal, it consists of texts on the background, the choice of methods and material, as well as results and discussion of the treatment regimens that have been studied in the trial. The aim was to compare a palliative chemoradiation regimen to palliative chemotherapy alone, with respect to survival, health-related quality of life (HRQOL) and toxicity in incurable stage III NSCLC patients with negative prognostic factors. Derived from the treatment – concurrent radiation – the trial was named The Conrad Study. Between November 2006 and November 2011patients not eligible for curative radiotherapy were randomized to receive either chemoradiation or chemotherapy alone. Four courses of intravenous carboplatin day 1 and oral vinorelbin day 1 and 8 were given with 3-week intervals. Patients in the chemoradiation arm also received radiotherapy with fractionation 42 Gy/15, starting at the 2nd chemotherapy course. Primary endpoint was overall survival; secondary were health related quality of life (HRQOL) and toxicity. Enrolment was terminated due to slow accrual after 191 patients from 25 Norwegian hospitals were randomized. Median age was 67 years and 21% had Performance Status 2. In the chemotherapy versus the chemoradiation arm, the median overall survival was 9.7 and 12.6 months, respectively (p<0.01). 1-year survival was 34.0 % and 53.2 % (p<0.01). Following a minor decline during treatment, HRQOL remained unchanged in the chemoradiation arm. The patients in the chemotherapy arm reported gradual deterioration during the subsequent months. In the chemoradiation arm, there were more hospital admissions related to side effects (p < 0.05) and PS 2 did not have survival benefits. Conclusions: Chemoradiation was superior to chemotherapy alone with respect to survival and HRQoL at the expense of more hospital admissions due to toxicity.