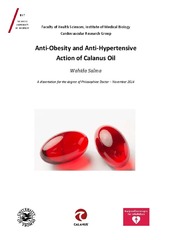 In this doctoral project we have examined the biological effects of Calanus oil in a mouse model of obesity. Calanus oil is extracted from the marine copepod Calanus finmarchicus and is one of the richest sources of poly-unsaturated fatty acids in nature. C57BL/6J mice were given a high-fat diet (HFD) over a 27 wk period in order to induce obesity, which was reflected in deposition of considerable amounts of fat in the abdominal cavity and liver. In mice receiving HFD supplemented with a small amount of Calanus oil (1.5%) fat accumulation was significantly less, despite no difference in food intake between the groups. Obesity was also associated with increased expression of genes (mRNA level) coding for pro-inflammatory molecules, as well as macrophage infiltration in adipose tissue, indicative of a local (low-grade) inflammation. Moreover, insulin sensitivity was impaired as documented by reduction in glucose tolerance. These obesity-induced alterations were clearly antagonized by dietary Calanus oil, irrespective of whether it was given from the onset of the feeding period or after obesity was established. Another important finding was that wax ester from Calanus oil (i.e. the pure lipid component of the oil, devoid of antioxidants and other bioactive substances) was as effective as crude Calanus oil for obtaining these beneficial effects, and the efficacy of wax ester in producing the anti-obesity effect was even stronger than that of the clinically used ethyl esters of purified EPA and DHA. Finally, the increase in blood pressure which occurred when obese C57BL/6J mice were challenged by angiotensin II infusion was virtually abolished in mice that had been pre-treated with dietary Calanus oil. Dietary Calanus oil also antagonized the reduction in body and organ weights associated with angiotensin II infusion.