Antibiotic use Human consumption patterns and effect on bacteria 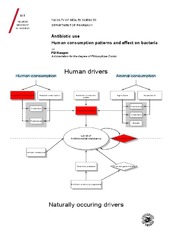 Prescriptions of antibiotics in Norway, and the effect of antibiotics on bacteria were investigated. The aim was to describe the consumption of antibiotics through prescriptions to patients and address how antibiotics can favour bacterial resistance. Several methods were applied, multivariate statistics, quantile regression and mathematical modelling of experimental conditions aided in the investigations. Variation in prescription profiles was found for patient gender and age groups, as well as for prescriber age groups and gender. Prescriber age interacts with patient demographic variables and influence antibiotic prescription profiles. This was also found for prescriber gender within sub groups of patients. Further the total amount of antibiotics prescribed in Norwegian municipalities varies up to ten fold and is dependent on municipality size and a south north gradient. Finally it was shown that a heterogeneous environment of antibiotics can favour maintenance of genetic elements that pose a fitness cost for bacteria.