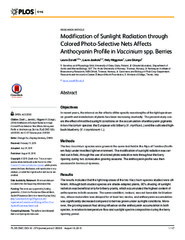 Objectives In recent years, the interest on the effects of the specific wavelengths of the light spectrum on growth and metabolism of plants has been increasing markedly. The present study covers the effect of modified sunlight conditions on the accumulation of anthocyanin pigments in two Vaccinium species: the European wild bilberry (V. myrtillus L.) and the cultivated highbush blueberry (V. corymbosum L.).

Methods The two Vaccinium species were grown in the same test field in the Alps of Trentino (Northern Italy) under modified light environment. The modification of sunlight radiation was carried out in field, through the use of colored photo-selective nets throughout the berry ripening during two consecutive growing seasons. The anthocyanin profile was then assessed in berries at ripeness.

Results The results indicated that the light responses of the two Vaccinium species studied were different. Although both studied species are shade-adapted plants, 90% shading of sunlight radiation was beneficial only for bilberry plants, which accumulated the highest content of anthocyanins in both seasons. The same condition, instead, was not favorable for blueberries, whose maturation was delayed for at least two weeks, and anthocyanin accumulation was significantly decreased compared to berries grown under sunlight conditions. Moreover, the growing season had strong influence on the anthocyanin accumulation in both species, in relation to temperature flow and sunlight spectra composition during the berry ripening period.

Conclusions Our results suggest that the use of colored photo-selective nets may be a complementary agricultural practice for cultivation of Vaccinium species. However, further studies are needed to analyze the effect of the light spectra modifications to other nutritional properties, and to elucidate the molecular mechanisms behind the detected differences between the two relative Vaccinium species.