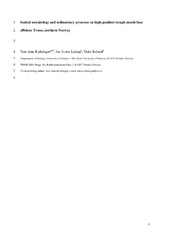 Trough mouth fans (TMF) situated at the mouths of formerly glaciated cross-shelf troughs are important paleoclimatic archives. Whereas the sedimentary processes of large, low-gradient TMFs have received considerable interest, little attention has been paid to the other end member of this landform class, i.e. TMFs with higher slope gradients. Detailed swath-bathymetric data and seismic profiles from the continental margin offshore Troms, northern Norway cover three high-gradient TMFs (the Andfjorden, Malangsdjupet and Rebbenesdjupet TMFs; slope gradients generally between 1° and 15°), as well as inter-fan areas, which include two submarine canyons (the Andøya and Senja Canyon) and the Malangsgrunnen inter-fan slope. The present-day morphologies of the Andfjorden and Malangsdjupet TMFs have evolved from sediment transport and distribution through gully-channel complexes. The Andfjorden TMF has later been affected by a large submarine landslide that remobilized much of these complexes. The Rebbenesdjupet TMF is dominated by a number of small and relatively shallow slide scars, which are inferred to be related to small-scale sediment failure of glaciomarine and/or contouritic sediments. The canyons cut into the adjacent TMFs, and turbidity currents originating on the fans widened and deepened the canyons during downslope flow. The Malangsgrunnen shelf break and inter-fan slope acted as a funnel for turbidity currents originating on the upper slope, forming a dendritic pattern of gullies. A conceptual model for the high-gradient TMFs on the Troms margin has been compiled. The main sediment input onto the TMFs has occurred during peak glacials when the Fennoscandian Ice Sheet reached the shelf edge. The overall convex fan form and progradational seismic facies show that these glacigenic deposits were repeatedly distributed onto the fan. On the Andfjorden and Malangsdjupet TMFs, gully-channel complexes occur within such deposits. It is thus inferred that the steep slope of these TMFs promoted rapid transformation from small-scale slumps and debris flows on the upper slope, into partly erosive turbidity currents. These flows continued into the deep sea, thus promoting efficient sediment by-pass across the TMFs. This model can be applied to other TMFs situated at the mouths of other glaciated cross-shelf troughs. In contrast, low-gradient TMFs are found to be dominated by glacigenic debris flow deposits. Furthermore, gully-channel complexes demonstrating the presence of erosive turbidity currents on high-gradient TMFs are rare on low-gradient TMFs. Large submarine landslides occur at both high- and low-gradient TMFs.

© 2015. This manuscript version is made available under the CC-BY-NC-ND 4.0 license http://creativecommons.org/licenses/by-nc-nd/4.0/