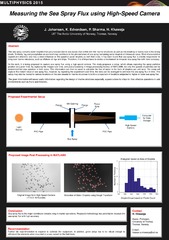 The sea spray contains water droplets that are produced due to sea waves that collide with the marine structures as well as the breaking of waves due to the strong winds. Similarly, fog and precipitation at sea level may contribute to the phenomenon of sea spray containing water droplets of minuscule sizes. Wind characteristics (speed and direction) also has a direct influence on the speed of water droplets as well their sizes. It has been found that sea spray flux is directly responsible for icing over marine structures, such as offshore oil rigs and ships. Therefore, it is of importance to devise a mechanism to measure sea spray flux with more accuracy.

In this work, it is being proposed to capture sea spray flux using a high-speed camera. The study proposes a setup, which allows capturing the spray particles position at a given time. By capturing the images over time, and post processing in Image processing toolbox of MATLAB®, not only the speeds of particles can be determined but also variation in their sizes. This information can then be used to calculate the flux of water in the form of droplets per unit area. The setup will capture the instant value of sea spray flux, however, by repeating the experiment over time, the data can be averaged to estimate the sea spray flux in time. This setup may also be moved to various locations on the sea vessels or marine structures to build a comparison of locations subjected to higher or lower sea spray flux.

The given information will reveal useful information regarding the design of marine structures especially, superstructure for ships for their effective operations in cold environments such as Arctic and Antarctic.

Poster presentation at The International Conference of Multiphysics, London, December 2015.