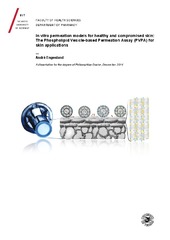 In vitro models with the ability to estimate drug penetration through healthy and compromised skin may reduce animal testing of drugs and cosmetics to a minimum. The phospholipid vesicle based permeation assay (PVPA) is based on a tight barrier composed of liposomes mimicking cells. It was originally made to mimic the intestinal epithelial barrier and in this project further developed to mimic the stratum corneum barrier of the skin. The lipid composition was changed to better mimic the lipid composition of skin and new preparation methods of the barriers were developed. The performance of two new skin mimicking PVPA models was evaluated by assessing the permeation of eight drugs. The two models developed in this study the PVPAs (E-80/ceramide/cholesterol/palmitic acid/cholesteryl sulphate) and PVPAc (E-80/cholesterol) appeared to distinguish between drugs of high and low penetration potential when compared with permeation data from animal skin and the reconstructed human skin, EpiSkin® as well as calculated data. Moreover, the PVPA models mimicking skin were also applied to evaluate the penetration potential of a drug in different liposomal formulations. The permeation of drugs from liposomal formulations was significantly enhanced as compared to the drugs in solution form and was able to distinguish between carriers with different physicochemical properties. Encouraged by the results from previous experiments, different drugs and drugs in liposomal formulations were tested in the PVPAs and PVPAc models and the permeability results were compared with the results for the reconstructed human skin model, EpiSkin®. The results were in accordance with what was expected considering the physicochemical properties. Finally, PVPA barriers mimicking a compromised skin barrier (accompanying skin disorders or skin damage) were developed. Two approaches were applied to prepare barriers with lower barrier function. First, by adjusting the concentration of ethanol used to fuse liposomes, thus controlling the tightness; second, reducing the thickness of the liposome layer. Results from the PVPA models demonstrated reliable increased permeation with the increased ethanol content and the decreased barrier thickness.