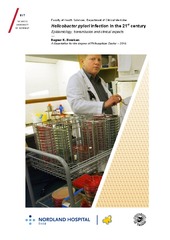 Background: More than half the world’s population is colonized with Helicobacter pylori (H. pylori) in the gastric mucosa which is the major cause of chronic gastritis and peptic ulcer. Moreover, H. pylori has been associated with the development of non-cardia gastric cancer, the second leading cause of cancer-related deaths worldwide, and has been linked to extra-intestinal diseases, with unsettled causal relationships. The human host immune response is unable to clear the H. pylori infection, and the clinical phenotype is dependent on the interactions between the host immune response and the pathogenicity of the bacterium. The prevalence of H. pylori infection is greatly reduced in developed countries but can be as high as >90% in underdeveloped countries, and remains a great health problem world-wide. Aims In a population based study from two North Norwegian cohorts, we aimed to - describe the association between H. pylori infection and reflux disease, functional bowel symptoms and obesity - describe the all age prevalence of H. pylori - describe potential transmission routes of H. pylori Results: We found that H. pylori is protective against reflux symptoms in men but not in women, whereas obesity was an independent risk factor for reflux symptoms in women. Functional bowel symptoms are prevalent in the population, and female gender, high body mass index and low age, but not H. pylori infection, are risk factors for the condition. There was no association between H. pylori infection and body mass index including being obese. In our populations with presently apparent high hygiene status, the transmission of H. pylori infection may start also in the adolescence, has a peak in adults, and potential transmission routes are out-door toilette, private well and farm animals but not as independent factors in multivariance analyses. Conclusion: In the start of the 21st century it seems that the H. pylori infection may start also in the adolescents, and has its peak in adults, and the transmission is associated to low hygiene standards. H. pylori infection is associated with reflux symptoms in men, but not with functional bowel symptoms or obesity.