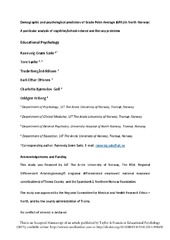 Education is important for the individual and for society. One of the most important and stable predictors of educational dropout is academic performance, typically measured by grades. This thesis aims to investigate factors related to academic performance and student dropout. It comprises two projects. The first project, Young Will (Ung vilje), is based on a sample of adolescents entering upper secondary school in the autumn of 2010. The second project, Learning in Higher Education, studies a sample of students entering university in the autumn of 2013. In the upper secondary sample, the most important predictors for lower grade point averages were male gender, enrolment in the vocational track, lower self-reported task solving abilities, lower educational ambitions, less promotion focus and more literacy problems. In the university sample, the most important predictors for lower grade point averages were less reported use of deep and strategic learning approaches and lower incoming grades. Literacy problems and procrastination were not significant predictors in the university sample. Predictors for student dropout, measured two years after enrolment in a study programme at university, were higher age, less use of surface learning approaches, fewer hours spent on studying, lower grades achieved in the first year and enrolment in study programmes with shorter durations. The findings indicate that educational institutions should focus not only on what students learn, but also on how they learn. At upper secondary level this includes supporting students with literacy problems and paying attention to low academic performance. At the higher education level, it seems important to foster productivity and commitment from the beginning of the study programme.