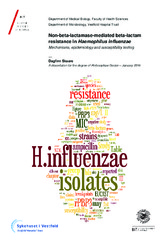 Haemophilus influenzae is a major pathogen, with the ability to cause a wide spectrum of invasive and non-invasive infections. Beta-lactams are first-line drugs but beta- lactam resistant strains are common. Beta-lactamase (bla) producing isolates emerged in the 1970s, and non-bla-mediated resistance due to mutations in the ftsI gene encoding penicillin-binding protein 3, denoted ‘rPBP3’ in this project, has increased in recent years. Low-rPBP3 H. influenzae are defined by the absence of the S385T substitution and the presence of R517H (group I) or N526K (group II); these genotypes predominate in Europe, North America and Australia, whereas high-rPBP3 isolates (defined by the additional S385T substitution) are common in Japan and Korea. Data from the Norwegian Surveillance System for Antimicrobial Drug Resistance (NORM) suggest that rPBP3 H. influenzae emerged in Norway in the early 2000s. In this project, two cross-sectional (I and II) and one longitudinal study (III) were performed to explore the resistance mechanisms, epidemiology and clinical characteristics of H. influenzae with non-bla-mediated beta-lactam resistance. The project was the first to characterize the resistance mechanism in Nordic H. influenzae with this phenotype. Study I encompassed 46 respiratory H. influenzae from NORM 2004, including 23 isolates with phenotypes suggesting the presence of non-bla-mediated beta-lactam resistance mechanisms and 23 susceptible control isolates. Study II encompassed 196 respiratory isolates from NORM 2007, including 177 with non-wild type susceptibility to beta-lactams not explained by bla, and 19 susceptible controls. Characterization included pulsed-field gel electrophoresis (PFGE), multilocus sequence typing (MLST), ftsI sequencing with deduction of PBP3 substitution patterns (PBP3 typing), and susceptibility testing by determination of beta-lactam MICs. The prevalence of rPBP3 isolates in 2007 was 14.6%. The exact prevalence in 2004 could not be calculated (≥4.8%), but was estimated to 5.7% based on NORM data and the rPBP3 prevalence / amoxicillin-clavulanic acid resistance rate ratio in 2007. These results indicate that the rPBP3 prevalence increased significantly in Norway from 2004 to 2007. Estimated rPBP3 prevalences in more recent NORM populations suggest a further increase to 16.6% in 2014. Enhanced selection pressure due to a 76% increase in amoxicillin usage between 2000 and 2012 may have contributed to the increased frequency of rPBP3 H. influenzae in Norway. Isolates with group II low-rPBP3 genotypes accounted for most (96%) of rPBP3 H. influenzae in NORM 2007, and four clones with unique combinations of MLST allelic profiles and ftsI alleles accounted for 61% of all rPBP3 isolates. Analyses of clonality and comparison with other investigations showed that rPBP3 clones might persist over several years. The ST14/PBP3 type A clone appears to be particularly persistent, widespread and virulent. A few (n=13) bla-negative isolates with non-wild type beta- lactam susceptibility lacked rPBP3-defining substitutions in Study II, suggesting the existence of additional resistance mechanisms. Study III encompassed 30 high-rPBP3 H. influenzae from Norway (2006-2013). Characterization included MLST, PFGE, ftsI sequencing, PBP3 typing and determination of broth microdilution (BMD) MIC for a wide range of agents. The strain collection is unique outside Japan. Of particular notice is the large number (n=23) of group III isolates (N526K + S385T), including 12 isolates with the additional L389F substitution associated with increased resistance. We suggest adding the suffix ‘(+)’ for L389F positive isolates. The resistance rates for extended-spectrum cephalosporins were high in Study III, varying from 47% (ceftriaxone) to 97% (cefixime). Among the isolates were the first reported invasive group III(+) H. influenzae from Europe, and an extensively multi-drug-resistant (MDR) group III(+) high-rPBP3 ST159 strain, resistant to all extended-spectrum cephalosporins tested, and four classes of non-beta-lactams. This remarkable resistotype is previously unreported. The MDR strain was isolated from three patients at the same hospital within a period of four days, illustrating the potential for nosocomial spread. Study III documented the emergence and spread of high-rPBP3 H. influenzae in Norway during the 2000s. A contribution of selective antimicrobial pressure is suggested by a 158% increase in extended-spectrum cephalosporin usage from 2000 to 2012, further underlining the importance of rational use of antibiotics. This project was the first to report identical ftsI alleles in rPBP3 strains unrelated by MLST, suggesting that horizontal transfer of rPBP3-encoding ftsI gene sequences contributes to the evolution of new rPBP3 strains in vivo. The situation calls for improved surveillance. The MLST-ftsI typing approach, developed and validated in Study II, is a powerful tool for global molecular surveillance of rPBP3 H. influenzae. MLST-PBP3 typing offers lower resolution but may be used as a surrogate approach. In Study IV, 154 bla-negative H. influenzae from Study II were used to evaluate nine disks as screening for isolates with rPBP3 genotypes, and Etest and EUCAST disk diffusion were evaluated for categorization of susceptibility to beta-lactams with BMD MICs as the gold standard. The benzylpenicillin 1 unit disk, recommended for screening by EUCAST and first evaluated in this project, detected rPBP3 H. influenzae with high sensitivity (96.2%) and specificity (94.0%) but is unsuitable for screening of bla-positive isolates. The cefuroxime 5 μg disk demonstrated high sensitivity (94.2%) and acceptable specificity (88.0%) and was superior to previously evaluated disks with bla-stable agents, including cefaclor 30 μg and cefuroxime 30 μg. Cefuroxime 5 μg appears to be the best current option for screening of bla-positive H. influenzae but the disk is not available from all manufacturers. False susceptible rates were high with ampicillin Etest (88%) and disk diffusion with ampicillin 2 μg (EUCAST zone breakpoints, 77%; adjusted breakpoints, 28%). The poor performance may in part be explained by poor calibration of Etest and methodology-dependent test variation, but also reflects that current clinical breakpoints for aminopenicillins divide the low-rPBP3 population, making susceptibility categorization vulnerable to day-to-day variation. Breakpoint changes may improve agreement with reference methodology, but clinical data to support breakpoints for H. influenzae and beta-lactams are insufficient. To minimize the clinical consequences of very major errors, a warning comment should be added for rPBP3 screening positive isolates susceptible to aminopenicillins by disk diffusion and gradient tests. H. influenzae positive by rPBP3 screening should be reported ampicillin resistant in cases of meningitis, irrespective of results by agent- directed testing.