Imaging in plastic surgery. A clinical and experimental study with notes on the history of medical imaging. 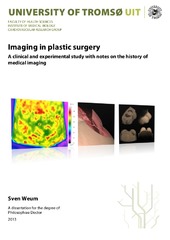 This thesis is based on four papers that have imaging techniques used in breast reconstruction as the common denominator. Each paper describes the results of a study. The purpose of the first three studies was to evaluate the use of dynamic infrared thermography (DIRT) as an imaging technique for perforator mapping in breast reconstruction with a deep inferior epigastric perforator (DIEP) flap. The purpose of the fourth study was to evaluate the form stability of the Style 410 anatomically shaped cohesive silicone gel-filled breast implant using magnetic resonance imaging (MRI). The studies reported cover a wide spectrum of imaging methods and all four illustrate how imaging may answer questions raised by the plastic surgeon. The first paper reports an experimental study in a university laboratory, the other three report clinical studies performed in a hospital setting. DIRT was introduced at the University Hospital North Norway in 2002. It was observed that DIRT could be a promising method for perforator mapping in breast reconstructive surgery with a DIEP flap, but scientific evidence for such use of DIRT was lacking. The results from the first three studies provide scientific evidence to support the use of DIRT in the preoperative planning of DIEP flaps in autologous breast reconstruction. DIRT can replace computed tomographic angiography (CTA), which is today’s gold standard, as an imaging technique for preoperative perforator mapping. Such will have great advantages for patients. Unlike CTA, the non-invasive technique DIRT does not require exposure to ionizing radiation or the use of an intravenous contrast medium. In the fourth study MRI is used in a novel way to visualize the behavior of the Style 410 breast implant in vivo as the body position is changed from supine to prone. The results show that the dimensions of the implant are influenced by the body position. The implant is therefore not form-stable with respect to its dimensions provided by the manufacturer, however, it nevertheless remains anatomically shaped with its largest projection in the lowest pole in both positions. Such knowledge on the behavior of the implant after implantation may help the surgeon in the preoperative planning and provides a better basis for patient information about the possible final result. All four studies illustrate the value of interdisciplinary collaboration between the radiologist and plastic surgeon. The first three provide scientific support for the clinical use of DIRT as an imaging technique for perforator mapping while the fourth uses the well-established method MRI to answer questions that would otherwise be difficult to answer from the surgeon’s clinical point of view.