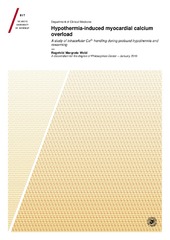 We performed randomized controlled experimental studies in an intact animal model and in isolated cardiac myocytes with the following aims: To establish an in vivo model for measuring cardiac intracellular [Ca2+] ([Ca2+]i) in an anesthetized rat with maintained spontaneous circulation. In this model we could sort out if alterations in Ca2+ homeostasis take place in response to hypothermia and rewarming. To investigate myocardial [Ca2+]i during graded hypothermic exposure-time and after rewarming during maintained spontaneous circulation. To describe the Ca2+ homeostasis in subcellular compartments; if mitochondria buffer excessive cytosolic Ca2+ in single beating cardiac myocytes during hypothermia and rewarming. Main results and conclusions: We established an in vivo model for measuring cardiac cell [Ca2+]i which revealed that cardiac Ca2+ overload evolves during long-lasting profound hypothermia, and that the increase in [Ca2+]i remains unchanged during rewarming. In vitro mitochondria buffer cytoplasmic [Ca2+] ([Ca2+]cyt) during hypothermia (0,5 hs). We conclude that prolonged deep hypothermia alters cardiac myocyte Ca2+ handling which may deteriorate mitochondrial function contributing to the post-hypothermic myocardial failure.