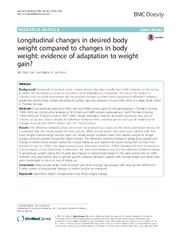 Background: Overweight individuals desire a lower weight than they actually have. Little is known on the extent to which this discrepancy is reduced over time due to adaptation or resignation. The aim of this study is to describe cross-sectional relationships and longitudinal changes in desired body weight and differences between actual and desired body weight according to gender, age and category of body mass index in a large, adult cohort in Tromsø, Norway.
Methods: Cross-sectional analyses of 8960 men and 9992 women aged 25–69 participating in Tromsø 4 (during 1994–1995), and longitudinal analyses of 3210 men and 3689 women participating in both Tromsø 4 (during 1994–1995) and Tromsø 6 (during 2007–2008). Simple descriptive statistics and linear regression was used to describe actual and desired weight, the difference between them, and how gender and age are related to the changes in actual and desired weight over this 13-year period.
Results: The difference between actual and desired body weight was largest for the obese and higher among the overweight than the normal weight for both genders. While normal weight men were quite satisfied with their body weight, normal weight women were not. Actual weight increased more than desired weight for all age groups and both genders except the oldest women. The difference between change in actual body weight and change in desired body weight during the 13-year follow-up was significantly larger among men (2.0 kg) than women (1.5 kg) (p < 0.001), and larger among young than older adults (p < 0.001). Adjusting for level of education had no impact on this relationship. Furthermore, the association between age and the difference between change in actual body weight during the 13 years and change in desired body weight in the same period did not differ between men and women and, in gender specific analyses, between subjects with normal weight and those who were overweight or obese at start of follow-up.
Conclusion: Older people adapt more to weight gain than younger age groups, with clear gender differences. Further studies of longitudinal changes in desired weight are warranted.