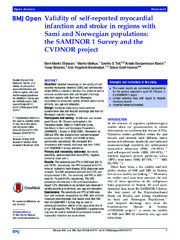 Objective: Updated knowledge on the validity of selfreported myocardial infarction (SMI) and self-reported stroke (SRS) is needed in Norway. Our objective was to compare questionnaire data and hospital discharge data from regions with Sami and Norwegian populations to assess the validity of these outcomes by ethnicity, sex, age and education.
Design: Validation study using cross-sectional questionnaire data and hospital discharge data from all Norwegian somatic hospitals.
Participants and setting: 16 865 men and women aged 30 and 36–79 years participated in the Population-based Study on Health and Living Conditions in Sami and Norwegian Populations (SAMINOR) 1 Survey in 2003–2004. Information on SMI and SRS was available from self-administered questionnaires for 15 005 and 15 088 of these participants, respectively. We compared this information with hospital discharge data from 1994 until SAMINOR 1 Survey attendance.
Primary and secondary outcomes: Sensitivity, specificity, positive predictive value (PPV), negative predictive value and κ.
Results: The sensitivity and PPV of SMI were 90.1% and 78.9%, respectively; the PPV increased to 93.1% when all ischaemic heart disease (IHD) diagnoses were included. The SMI prevalence estimate was 2.3% and hospital-based 2.0%. The sensitivity and PPV of SRS were 81.1% and 64.3%, respectively. The SRS prevalence estimate was 1.5% and hospitalisationbased 1.2%. Moderate to no variation was observed in validity according to ethnicity, sex, age and education.
Conclusions: The sensitivity and PPV of SMI were high and moderate, respectively; for SRS, both of these measures were moderate. Our results show that SMI from the SAMINOR 1 Survey may be used in aetiological/analytical studies in this population due to a high IHD-specific PPV. The SAMINOR 1 questionnaire may also be used to estimate the prevalence of acute myocardial infarction and acute stroke.

This is an Open Access article distributed in accordance with the Creative Commons Attribution Non Commercial (CC BY-NC 4.0) license, which permits others to distribute, remix, adapt, build upon this work noncommercially, and license their derivative works on different terms, provided the original work is properly cited and the use is non-commercial.
This article is also published online at doi:10.1136/bmjopen-2016-012717