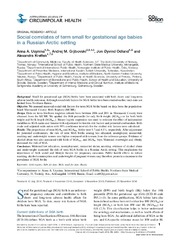 Background. Small for gestational age (SGA) births have been associated with both short- and long-term adverse health outcomes. Although social risk factors for SGA births have been studied earlier, such data are limited from Northern Russia.
Objective. We assessed maternal social risk factors for term SGA births based on data from the population- 20 based Murmansk County Birth Registry (MCBR).
Design. Data on term live-born singleton infants born between 2006 and 2011 in Murmansk County were obtained from the MCBR. We applied the 10th percentile for only birth weight (SGAW) or for both birth weight and birth length (SGAWL). Binary logistic regression was used to estimate the effect of independent variables on SGA males and females with adjustment for known risk factors and potential confounders. Both 25 crude and adjusted odds ratios with 95% confidence intervals for the studied risk factors were calculated.
Results. The proportions of term SGAW and SGAWL births were 9.7 and 4.1%, respectively. After adjustment for potential confounders, the risk of term SGA births among less educated, unemployed, unmarried, smoking and underweight women was higher compared with women from the reference groups. Evidence of alcohol abuse was also associated with birth of SGAWL and SGAW boys. Maternal overweight and obesity 30 decreased the risk of SGA.
Conclusions. Maternal low education, unemployment, unmarried status, smoking, evidence of alcohol abuse and underweight increased the risk of term SGA births in a Russian Arctic setting. This emphasizes the importance of both social and lifestyle factors for pregnancy outcomes. Public health efforts to reduce smoking, alcohol consumption and underweight of pregnant women may therefore promote a decrease in the 35 prevalence of SGA births.

This is an Open Access article distributed under the terms of the Creative Commons Attribution 4.0 International License, allowing third parties to copy and redistribute the material in any medium or format and to remix, transform, and build upon the material for any purpose, even commercially, provided the original work is properly cited and states its license. DOI:10.3402/ijch.v75.32883