Weight Change and Risk of Venous Thromboembolism: The Tromsø Study 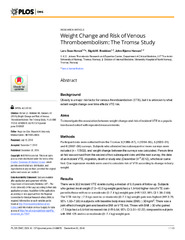 Background: Obesity is a major risk factor for venous thromboembolism (VTE), but it is unknown to what extent weight change over time affects VTE risk.
Aims: To investigate the association between weight change and risk of incident VTE in a population-based cohort with repeated measurements.
Methods: Participant data were collected from the Tromsø 3 (1986–87), 4 (1994–95), 5 (2000–01) and 6 (2007–08) surveys. Subjects who attended two subsequent or more surveys were included (n = 17802), and weight change between the surveys was calculated. Person-time at risk was accrued from the second of two subsequent vists until the next survey, the date of an incident VTE, migration, death or study end (December 31st 2012), whichever came first. Cox regression models were used to calculate risk of VTE according to change in body weight.
Results: There were 302 incident VTE events during a median of 6.0 years of follow-up. Subjects who gained most weight (7.5–40.0 kg weight gain) had a 1.9-fold higher risk of VTE compared to those with no or a moderate (0–7.4 kg) weight gain (HR 1.92; 95% CI 1.38–2.68). The VTE risk by 7.5 kgs over no or moderate (0–7.4 kg) weight gain was highest (HR 3.75; 95% 1.83–7.68) in subjects with baseline body mass index (BMI) 30 kg/m2 . There was a joint effect of weight gain and baseline BMI on VTE risk. Those with BMI 30 who gained 7.5 kgs had a 6.6-fold increased risk (HR 6.64; 95% CI 3.61–12.22) compared to subjects with BMI <25 and no or moderate (0–7.4 kg) weight gain.
Conclusions: Our findings imply that further weight gain is a considerable risk factor for VTE, particularly in obese individuals.

This is an open access article distributed under the terms of the Creative Commons Attribution License, which permits unrestricted use, distribution, and reproduction in any medium, provided the original author and source are credited.
This article is also available via DOI:10.1371/journal.pone.0168878