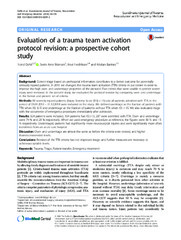 Background: Correct triage based on prehospital information contributes to a better outcome for potentially seriously injured patients. In 2011 we changed the trauma team activation (TTA) criteria in our center in order to improve the high over- and undertriage properties of the protocol. Five criteria that were unable to predict severe injury were removed. In the present study, we evaluated the protocol revision by comparing over- and undertriage in the former and present set of criteria.
Methods: All severely injured patients (Injury Severity Score (ISS) > 15) and all patients admitted with TTA in the period of 01.01.2013 – 31.12.2014 were included in the study. We defined overtriage as the fraction of patients with TTA when ISS ≤15 and undertriage as the fraction of patients without TTA when ISS > 15. We also evaluated triage with the occurrence of emergency procedures immediately after admission. Results: 324 patients were included, 164 patients had ISS>15, 287 were admitted with TTA. Over- and undertriage were 74 % and 28 % respectively. When we used emergency procedure as reference, the figures were 83 % and 15 % respectively. Undertriaged patients had significantly more neurosurgical injuries and were significantly more often transferred from an acute care hospital.
Discussion: Over- and undertriage are almost the same as before the criteria were revised, and higher thanrecommended levels.
Conclusions: Revision of the TTA criteria has not improved triage, and further measures are necessary to achieveacceptable levels.

This is an open access article distributed under the terms of the Creative Commons Attribution License, which permits unrestricted use, distribution, and reproduction in any medium, provided the original author and source are credited.
This article is also available via DOI:10.1186/s13049-016-0295-3