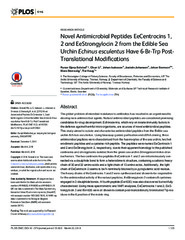 The global problem of microbial resistance to antibiotics has resulted in an urgent need to develop new antimicrobial agents. Natural antimicrobial peptides are considered promising candidates for drug development. Echinoderms, which rely on innate immunity factors in the defence against harmful microorganisms, are sources of novel antimicrobial peptides. This study aimed to isolate and characterise antimicrobial peptides from the Edible sea urchin Echinus esculentus. Using bioassay-guided purification and cDNA cloning, three antimicrobial peptides were characterised from the haemocytes of the sea urchin; two heterodimeric peptides and a cysteine-rich peptide. The peptides were named EeCentrocin 1 and 2 and EeStrongylocin 2, respectively, due to their apparent homology to the published centrocins and strongylocins isolated from the green sea urchin Strongylocentrotus droebachiensis. The two centrocin-like peptides EeCentrocin 1 and 2 are intramolecularly connected via a disulphide bond to form a heterodimeric structure, containing a cationic heavy chain of 30 and 32 amino acids and a light chain of 13 amino acids. Additionally, the light chain of EeCentrocin 2 seems to be N-terminally blocked by a pyroglutamic acid residue. The heavy chains of EeCentrocins 1 and 2 were synthesised and shown to be responsible for the antimicrobial activity of the natural peptides. EeStrongylocin 2 contains 6 cysteines engaged in 3 disulphide bonds. A fourth peptide (Ee4635) was also discovered but not fully characterised. Using mass spectrometric and NMR analyses, EeCentrocins 1 and 2, EeStrongylocin 2 and Ee4635 were all shown to contain post-translationally brominated Trp residues in the 6 position of the indole ring.

This is an open access article distributed under the terms of the Creative Commons Attribution License, which permits unrestricted use, distribution, and reproduction in any medium, provided the original author and source are credited.
This article is also available via DOI:10.1371/journal.pone.0151820