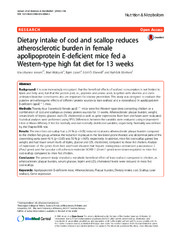 Background: It is now increasingly recognized that the beneficial effects of seafood consumption is not limited to lipids and fatty acid, but that the protein part, i.e., peptides and amino acids, together with vitamins and even unknown bioactive constituents also are important for disease prevention. This study was designed to evaluate the putative anti-atherogenic effects of different protein sources (a lean seafood and a nonseafood) in apolipoprotein E-deficient (apoE−/− ) mice.
Methods: Twenty-four 5-week-old female apoE−/− mice were fed Western type diets containing chicken or a combination of cod and scallops as dietary protein sources for 13 weeks. Atherosclerotic plaque burden, weight, serum levels of leptin, glucose and LDL cholesterol as well as gene expressions from liver and heart were evaluated. Statistical analyses were performed using SPSS. Differences between the variables were evaluated using independent t-test or Mann–Whitney U test for normally and non-normally distributed variables, respectively. Normality was defined by the Shapiro-Wilk test.
Results: The mice fed cod-scallop had a 24 % (p < 0.05) reduced total aorta atherosclerotic plaque burden compared to the chicken fed group, whereas the reduction in plaque in the less lesion prone thoracic and abdominal parts of the descending aorta were 46 % (p < 0.05) and 56 % (p < 0.05), respectively. In addition, mice fed cod-scallop gained less weight, and had lower serum levels of leptin, glucose and LDL cholesterol, compared to those fed chicken. Analysis of expression of the genes from liver and heart showed that hepatic endogenous antioxidant paraoxonase 2 (Pon2 gene) and the vascular cell adhesion molecule VCAM-1 (Vcam1 gene) were down regulated in mice fed cod-scallop compared to mice fed chicken.
Conclusion: The present study revealed a metabolic beneficial effect of lean seafood compared to chicken, as atherosclerotic plaque burden, serum glucose, leptin and LDL cholesterol levels were reduced in mice fed cod-scallop.

This is an open access article distributed under the terms of the Creative Commons Attribution License, which permits unrestricted use, distribution, and reproduction in any medium, provided the original author and source are credited.
This article is also available via DOI:10.1186/s12986-016-0068-z