Adolescents and self-harm. A study of factors associated with suicide and use of health care services following self-harm in national representative populations of Norwegian adolescents 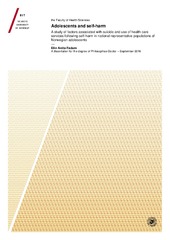 This thesis uses data recorded in Norwegian governmental health registers, as well as data collected in a nationwide school survey carried out in Norway, to study risk factors for suicide and factors associated with the use of health services following self-harm in adolescents. Paper I examined suicide in a population of half a million men with physician-diagnosed minor or major mental health impairment in adolescence. The main finding was that risk of suicide was elevated both in apparently well-functioning young men with minor mental health impairment and in young men with major mental health impairment. Paper II examined the characteristics of adolescents who were admitted to hospital for self-poisoning with medications and identified factors associated with hospital readmission for subsequent self-poisoning with medications. This study demonstrated significant differences between the sexes in hospital admissions and in treatment for this condition. Moreover, the study showed that nearly 20% of the adolescents who were hospitalized for self-poisoning with medications were subsequently readmitted for the same reason. Female gender and secondary psychiatric diagnosis had a strong predictive effect on hospital readmission. Paper III examined self-reported use of health care services in adolescents who reported self-harm with or without suicide intent and lived in areas with different geographic proximity to the hospital. The study found that adolescents who self-harmed with suicide intent reported more help and treatment compared to those who self-harmed without suicide intent. Adolescents who attended school in municipalities in which a hospital was located were more likely than those who lived outside these areas to report using health services following self-harm, but this association was only present among adolescents who self-harmed without suicide intent.

The paper I of this thesis is not available in Munin.
Paper I: Fadum, E. A., Fønnebø, V., Borud, E. K.: “Presence of minor and major mental health impairment in adolescence and death from suicide and unintentional injuries/accidents in males. A national longitudinal cohort study”. Available in J Epidemiol Community Health 2016.