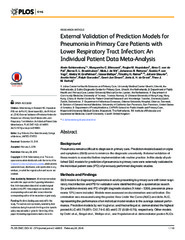 Background:
Pneumonia remains difficult to diagnose in primary care. Prediction models based on signs and symptoms (S&S) serve to minimize the diagnostic uncertainty. External validation of these models is essential before implementation into routine practice. In this study all published S&S models for prediction of pneumonia in primary care were externally validated in the individual patient data (IPD) of previously performed diagnostic studies.
Methods and Findings:
S&S models for diagnosing pneumonia in adults presenting to primary care with lower respiratory tract infection and IPD for validation were identified through a systematical search. Six prediction models and IPD of eight diagnostic studies (N total = 5308, prevalence pneumonia 12%) were included. Models were assessed on discrimination and calibration. Discrimination was measured using the pooled Area Under the Curve (AUC) and delta AUC, representing the performance of an individual model relative to the average dataset performance. Prediction models by van Vugt et al. and Heckerling et al. demonstrated the highest pooled AUC of 0.79 (95% CI 0.74–0.85) and 0.72 (0.68–0.76), respectively. Other models by Diehr et al., Singal et al., Melbye et al., and Hopstaken et al. demonstrated pooled AUCs of 0.65 (0.61–0.68), 0.64 (0.61–0.67), 0.56 (0.49–0.63) and 0.53 (0.5–0.56), respectively. A similar ranking was present based on the delta AUCs of the models. Calibration demonstrated close agreement of observed and predicted probabilities in the models by van Vugt et al. and Singal et al., other models lacked such correspondence. The absence of predictors in the IPD on dataset level hampered a systematical comparison of model performance and could be a limitation to the study.
Conclusions:
The model by van Vugt et al. demonstrated the highest discriminative accuracy coupled with reasonable to good calibration across the IPD of different study populations. This model is therefore the main candidate for primary care use.