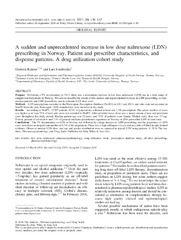 Purpose: Following a TV documentary in 2013, there was a tremendous increase in low dose naltrexone (LDN) use in a wide range of unapproved indications in Norway. We aim to describe the extent of this sudden and unprecedented increase in LDN prescribing, to characterize patients and LDN prescribers, and to estimate LDN dose sizes.
Methods: LDN prescriptions recorded in the Norwegian Prescription Database (NorPD) in 2013 and 2014, and sales data not recorded in NorPD from the only Norwegian LDN manufacturer were included in the study.
Results: According to NorPD, 15 297 patients (0.3% of population) collected at least one LDN prescription. The actual number of users was higher as at least 23% of total sales were not recorded in NorPD. After an initial wave, there was a steady stream of new and persistent users throughout the study period. Median patient age was 52 years, and 74% of patients were female. Median daily dose was 3.7 mg. Twenty percent of all doctors and 71% of general medicine practitioners registered in Norway in 2014 prescribed LDN at least once.
Conclusions The TV documentary on LDN in Norway was followed by a large increase in LDN prescribing, and the proportion of LDN users went from an insignificant number to 0.3% of the population. There was a high willingness to use and prescribe off label despite limited evidence. Observed median LDN dose, and age and gender distribution were as expected in typical LDN using patients.