Impact of incident myocardial infarction on the risk of venous thromboembolism: the Tromsø Study 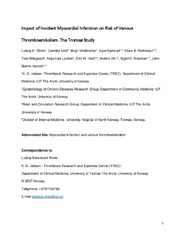 Objectives: We aimed to study the association between incident myocardial infarction (MI) and VTE in a prospective population-based cohort.

Methods: Study participants (n=29 506) were recruited from three surveys of the Tromsø Study (conducted in 1994-95, 2001-02 and 2007-08) and followed through 2010. All incident events of MI and VTE during follow-up were recorded. Cox-regression models with age as time scale and MI as a time-dependent variable were used to calculate hazard ratios (HR) of VTE adjusted for sex, BMI, blood pressure, diabetes mellitus, HDL-cholesterol, smoking, physical activity and education level.

Conclusions: Our findings indicate that MI is associated with a transient increased risk of VTE independent of traditional atherosclerotic risk factors. The risk estimates were particularly high for PE.