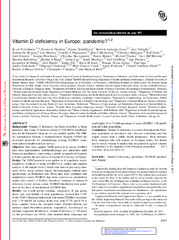 Background:
Vitamin D deficiency has been described as being pandemic, but serum 25-hydroxyvitamin D [25(OH)D] distribution data for the European Union are of very variable quality. The NIH-led international Vitamin D Standardization Program (VDSP) has developed protocols for standardizing existing 25(OH)D values from national health/nutrition surveys.
Objective:
This study applied VDSP protocols to serum 25(OH)D data from representative childhood/teenage and adult/older adult European populations, representing a sizable geographical footprint, to better quantify the prevalence of vitamin D deficiency in Europe.
Design:
The VDSP protocols were applied in 14 population studies [reanalysis of subsets of serum 25(OH)D in 11 studies and complete analysis of all samples from 3 studies that had not previously measured it] by using certified liquid chromatography–tandem mass spectrometry on biobanked sera. These data were combined with standardized serum 25(OH)D data from 4 previously standardized studies (for a total n = 55,844). Prevalence estimates of vitamin D deficiency [using various serum 25(OH)D thresholds] were generated on the basis of standardized 25(OH)D data.
Results:
An overall pooled estimate, irrespective of age group, ethnic mix, and latitude of study populations, showed that 13.0% of the 55,844 European individuals had serum 25(OH)D concentrations <30 nmol/L on average in the year, with 17.7% and 8.3% in those sampled during the extended winter (October–March) and summer (April–November) periods, respectively. According to an alternate suggested definition of vitamin D deficiency (<50 nmol/L), the prevalence was 40.4%. Dark-skinned ethnic subgroups had much higher (3- to 71-fold) prevalence of serum 25(OH)D <30 nmol/L than did white populations.
Conclusions:
Vitamin D deficiency is evident throughout the European population at prevalence rates that are concerning and that require action from a public health perspective. What direction these strategies take will depend on European policy but should aim to ensure vitamin D intakes that are protective against vitamin D deficiency in the majority of the European population.