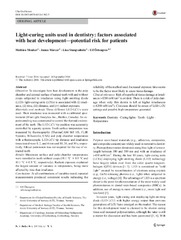 Objectives:
To investigate how heat development in the pulp chamber and coronal surface of natural teeth with and without cusps subjected to irradiance using light-emitting diode (LED)–light-curing units (LCUs) is associated with (i) irradiance, (ii) time, (iii) distance, and (iv) radiant exposure.
Materials and methods:
Three different LED-LCUs were used. Their irradiance was measured with a calibrated spectrometer (BlueLight Analytics Inc., Halifax, Canada). An experimental rig was constructed to control the thermal environment of the teeth. The LED-LCU tip position was accurately controlled by a gantry system. Tooth surface temperature was measured by thermography (ThermaCAM S65 HS, FLIR Systems, Wilsonville, USA) and pulp chamber temperature with a thermocouple. LED-LCU tip distance and irradiation times tested were 0, 2, and 4 mm and 10, 20, and 30 s, respectively. Ethical permission was not required for the use of extracted teeth.
Results:
Maximum surface and pulp chamber temperatures were recorded in tooth without cusps (58.1 °C ± 0.9 °C and 43.1 °C ± 0.9 °C, respectively). Radiant exposure explained the largest amount of variance in temperature, being more affected by time than irradiance.
Conclusions:
At all combinations of variables tested, repeated measurements produced consistent results indicating the reliability of the method used. Increased exposure time seems to be the factor most likely to cause tissue damage.
Clinical relevance:
Risk of superficial tissue damage at irradiances >1200 mW/cm2 is evident. There is a risk of pulp damage when only thin dentin is left at higher irradiances (>1200 mW/cm2). Clinicians should be aware of LED-LCU settings and possible high temperature generated.