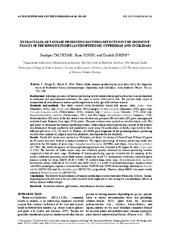 Background. Although, presence of tannase-producing and/or tannin tolerant gut bacteria has been documented in ruminants and non-ruminant herbivores, the topic is rarely addressed in fi sh. The present study aimed at enumeration of autochthonous tannase-producing bacteria in the gut of freshwater teleosts.

Results. Totally 685 strains were isolated on TSA plates, of which 116 strains (37 from PI and 79 from DI) grow on TA media and were defi ned as tannase-producers. The highest percentage of tannase-producing strains was noticed in the DI regions of grass carp, Ctenopharyngodon idella (38.98%), and tilapia, Oreochromis niloticus (37.74%). The lowest frequency of tannase-producing bacteria was revealed in PI region of catla, Catla catla (2.12%). The intestine of Indian major carps was relatively poorly colonized by tannase-producing bacteria compared to that of exotic carps. Evaluation of tannase-producing capacity revealed that the majority of the isolates exhibited maximum extracellular tannase production at pH 7.0. Quantitative evaluation, showed highest tannase activity by strain HMT1 (0.28 ± 0.001 U) isolated from silver carp, Hypophthalmichthys molitrix, followed by strains ONH2Ph (0.19 ± 0.005) and ONH13B (0.17 ± 0.009 U) isolated from tilapia. Analyses of the 16S rRNA partial gene sequences revealed that strains ONH2Ph and ONH13B showed high similarity to Bacillus subtilis (KP765736) and Brevibacillus agri (KP765734), respectively. Whereas, strain HMT1 was most closely related to Klebsiella variicola (KP765735).