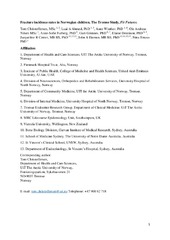 Summary:
This study describes childhood fracture rates in Norway, a country known for high fracture rates in the adult population. Fracture rates correspond with other reports from Scandinavia, although with a slightly higher proportion in girls. Indications of increased vulnerability during stages of puberty require further exploration.

Introduction: Fractures are common injuries during childhood. Incidence rates and patterns vary, but population-based data are scarce. The aim of this study was to describe the sex-, age- and maturation-specific incidence of fractures in a representative population-based sample from a region in Norway.

Methods: All fractures in the population based convenient cohort Fit Futures, comprising 961 adolescents under 18 years, were recorded retrospectively from the local hospital. Details on individual’s age and fracture site were recorded. A radiologist confirmed all fractures.

Results: In the period from birth to cohort scanning, the register recorded 316 fractures in 253 individuals. Fractures were more common in boys (35%) than in girls (31%). The overall annual fracture incidence was 204 per 10,000 persons-year under the age of 18 and 205 under the age of 16. The majority of fractures involved the upper extremities and the most common site of fracture was the forearm with 24% of the fractures followed by phalanges with 23% of the fractures. Fractures peaked in girls at sexual maturation stage 3. Boys had a peak in stage 2. Timing of subsequent fractures was also consistent with stages of sexual maturation.

Conclusions: The overall incidence of fractures in childhood in Northern Norway corresponds with other reports from Scandinavia, although the proportion of fractures in girls is higher than in other studies. Both sexes seem especially vulnerable at stages related to sexual maturation. Whether this reflects bone vulnerability or other changes related to puberty requires further investigation.