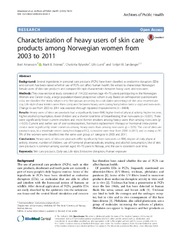 Background: Several ingredients in personal care products (PCPs) have been classified as endocrine disruptors (EDs) and concern has been raised whether use of PCPs can affect human health. We aimed to characterize Norwegian female users of skin care products and compare life style characteristics between heavy users and non-users.

Methods: This cross-sectional study consisted of 114 202 women (age 41–76 years) participating in the Norwegian Women and Cancer study, a large population-based prospective cohort study. Based on self-reported questionnaire data, we classified the study subjects into five groups according to a calculated percentage of skin area creamed per day. Life-style characteristics were then compared between heavy users (using body lotion twice a day) and non-users. Change in use from 2003 to 2011 was assessed through repeated measurements (n = 8484).

Results: Heavy users of skin care products had a significantly lower BMI, higher level of physical activity, higher income, higher alcohol consumption, fewer children and a shorter total time of breastfeeding than non-users (p < 0.001). There were significantly fewer current smokers and more former smokers among heavy users than among non-users (p < 0.01). Current and earlier use of oral contraceptives, hormone replacement therapy or hormonal intra-uterine device were significantly more common among heavy users than among non-users (p < 0.01). The use of skin care products was, to a moderate extent (weighted kappa 0.52), consistent over time from 2003 to 2011, and as many as 91. 5% of the women were classified into the same user group ±1 category in 2003 and 2011.

Conclusions: Heavy users of skin care products differ significantly from non-users on BMI, degree of daily physical activity, income, number of children, use of hormonal pharmaceuticals, smoking and alcohol consumption. Use of skin care products is common among women aged 41–76 years in Norway, and the use is consistent over time.