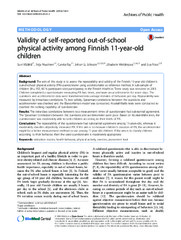 Background: The aim of this study is to assess the repeatability and validity of the Finnish 11-year old children’s out-of-school physical activity (PA) questionnaire using accelerometer as reference method. A sub-sample of children (N = 155, 60 % participant rate) participating in the Finnish Health in Teens study was recruited in 2013. Children completed a questionnaire measuring PA two times, and wore an accelerometer for seven days. The questions and accelerometer data were transformed into average minutes of behaviors per day. Repeatability was measured by intra-class correlations. To test validity, Spearman correlations between the questions and accelerometer was checked and the Bland-Altman model was conducted. Kruskall-Wallis tests were conducted to examine the ranking capability of questionnaire.

Conclusions: The repeatability of the questionnaire had substantial agreement among 11-years-old, whereas it moderately classifies objectively measured PA. If the aim is to measure children’s duration of PA, the accelerometer might be a better measurement method to use among 11-year old children. If the aim is to classify children according to their behavior, then the used questionnaire is moderately appropriate.