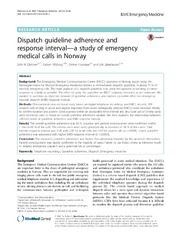 Background:
The Emergency Medical Communication Centre (EMCC) operators in Norway report using the Norwegian Index for Medical Emergency Assistance (Index), a criteria-based dispatch guideline, in about 75 % of medical emergency calls. The main purpose of a dispatch guideline is to assist the operator in securing a correct response as quickly as possible. The effect of using the guideline on EMCC response interval is as yet unknown. We wanted to ascertain an objective measure of guideline adherence, and explore a possible effect on emergency medical dispatch (EMD) response interval.
Methods:
Observational cross-sectional study based on digital telephone recordings and EMCC records; 299 random calls ending in acute and urgent responses from seven strategically selected EMCCs were included. Ability to confirm location and patient consciousness within an acceptable time interval and structural use of criteria cards were indicators used to create an overall guideline adherence variable. We then explored the relationship between different levels of guideline adherence and EMD response interval.
Results:
The overall guideline adherence was 80 %. Location and patient consciousness were confirmed within 1 min in 83 % of the calls. The criteria cards were used systematically as intended in 64 % of the cases. Total median response interval was 2:28, with 2:01 for acute calls and 4:10 for urgent calls (p < 0.0005). Lower guideline adherence was associated with higher EMD response interval (p < 0.0005).
Conclusion:
The measured guideline adherence was higher than previously reported by the operators themselves. Patient consciousness was rapidly confirmed in the majority of cases. Failure to use Index criteria as intended result in delayed ambulance dispatch and a potential risk of undertriage.