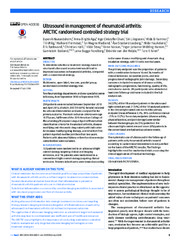 Objective: To determine whether a treatment strategy based on structured ultrasound assessment would lead to improved outcomes in rheumatoid arthritis, compared with a conventional strategy.

Setting: Ten rheumatology departments and one specialist centre in Norway, from September 2010 to September 2015.

Participants: 238 patients were recruited between September 2010 and April 2013, of which 230 (141 (61%) female) received the allocated intervention and were analysed for the primary outcome. The main inclusion criteria were age 18-75 years, fulfilment of the 2010 American College of Rheumatology/European League Against Rheumatism classification criteria for rheumatoid arthritis, disease modifying anti-rheumatic drug naivety with indication for disease modifying drug therapy, and time from first patient reported swollen joint less than two years. Patients with abnormal kidney or liver function or major comorbidities were excluded.

Interventions: 122 patients were randomised to an ultrasound tight control strategy targeting clinical and imaging remission, and 116 patients were randomised to a conventional tight control strategy targeting clinical remission. Patients in both arms were treated according to the same disease modifying anti-rheumatic drug escalation strategy, with 13 visits over two years.

Main outcome measures: The primary endpoint was the proportion of patients with a combination between 16 and 24 months of clinical remission, no swollen joints, and nonprogression of radiographic joint damage. Secondary outcomes included measures of disease activity, radiographic progression, functioning, quality of life, and adverse events. All participants who attended at least one follow-up visit were included in the full analysis set.

Conclusions: The systematic use of ultrasound in the follow-up of patients with early rheumatoid arthritis treated according to current recommendations is not justified on the basis of the ARCTIC results. The findings highlight the need for randomised trials assessing the clinical application of medical technology.