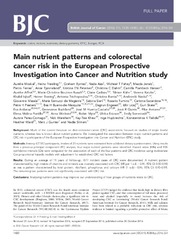 Background: Much of the current literature on diet–colorectal cancer (CRC) associations focused on studies of single foods/ nutrients, whereas less is known about nutrient patterns. We investigated the association between major nutrient patterns and CRC risk in participants of the European Prospective Investigation into Cancer and Nutrition (EPIC) study.

Results: During an average of 11 years of follow-up, 4517 incident cases of CRC were documented. A nutrient pattern characterised by high intakes of vitamins and minerals was inversely associated with CRC (HR per 1 s.d.¼0.94, 95% CI: 0.92–0.98) as was a pattern characterised by total protein, riboflavin, phosphorus and calcium (HR (1 s.d.)¼0.96, 95% CI: 0.93–0.99). The remaining two patterns were not significantly associated with CRC risk.