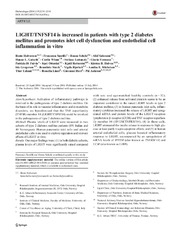 Results: Our major findings were: (1) in both diabetic cohorts, plasma levels of LIGHT were significantly raised compared with sex- and age-matched healthy controls (n = 32); (2) enhanced release from activated platelets seems to be an important contributor to the raised LIGHT levels in type 2 diabetes mellitus; (3) in human pancreatic islet cells, inflammatory cytokines increased the release of LIGHT and upregulated mRNA and protein levels of the LIGHT receptors lymphotoxin β receptor (LTβR) and TNF receptor superfamily member 14 (HVEM/TNFRSF14); (4) in these cells, LIGHT attenuated the insulin release in response to high glucose at least partly via pro-apoptotic effects; and (5) in human arterial endothelial cells, glucose boosted inflammatory response to LIGHT, accompanied by an upregulation of mRNA levels of HVEM (also known as TNFRSF14) and LTβR (also known as LTBR).

Conclusions/interpretation: Our findings show that patients with type 2 diabetes mellitus are characterised by increased plasma LIGHT levels. Our in vitro findings suggest that LIGHT may contribute to the progression of type 2 diabetes mellitus by attenuating insulin secretion in pancreatic islet cells and by contributing to vascular inflammation.