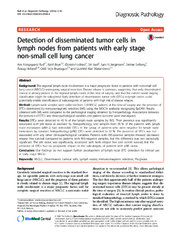 Background: The regional lymph node involvement is a major prognostic factor in patients with non-small cell lung cancer (NSCLC) undergoing surgical resection. Disease relapse is common, suggesting that early disseminated disease is already present in the regional lymph nodes at the time of surgery, and that the current nodal staging classification might be suboptimal. Early detection of disseminated tumor cells (DTCs) in lymph nodes could potentially enable identification of subcategories of patients with high risk of disease relapse.


Method: Lymph node samples were collected from 128 NSCLC patients at the time of surgery and the presence of DTCs determined by immunomagnetic selection (IMS) using the MOC31 antibody recognizing EpCAM. Results obtained with IMS were compared to the pathological staging obtained by histopathology. Associations between the presence of DTCs and clinicopathological variables and patient outcome were investigated.

Results: DTCs were detected in 40 % of the lymph node samples by IMS. Their presence was significantly associated with pN status as assessed by histopathology, and samples from 83 % of the patients with lymph node metastases (pN1-2) had detectable DTCs. In the group of patients who were negative for lymph node metastases by standard histopathology (pN0) DTCs were detected in 32 %. The presence of DTCs was not associated with any other clinicopathological variables. Patients with IMS-positive samples showed decreased relapse free survival compared to patients with IMS-negative samples, but the difference was not statistically significant. The pN status was significantly associated with both relapse free and overall survival, but the presence of DTCs had no prognostic impact in the subcategory of patients with pN0 status.

Conclusion: Our findings do not support further development of lymph node DTC detection for clinical use in early stage NSCLC.