Fern rhizomes as fodder in Norway 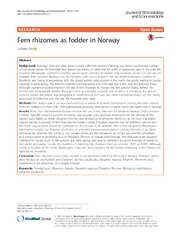 Background: Although ferns are often known under collective names in Norway, e.g. blom, a substantial number of vernacular names for individual fern species are known, in particular for useful or poisonous taxa. In the past, the rhizomes (Norwegian: moldfôr) of selected species were collected for fodder. Only scattered records of such use are available from southern Norway, and the tradition’s core area is found in the two North Norwegian counties of Nordland and Troms, in accordance with the longer winters encountered in the north, frequently leading to fodder shortage in early spring. The tradition extends northeastwards into Finnmark, but is less well documented there. Although numerous sources mention the use of fern rhizomes for fodder, the fern species hiding behind the tradition are incompletely known. This paper aims at reviewing available data in terms of identifyng the species used for fodder, the history and geographical distribution of such use, and other relevant traditions, e.g. the timing and mode of collection, and the way the rhizomes were used.

Methods: The study is based on data extracted from a variety of archival and literature sources; the latter retrived from my database of more than 7500 publications providing information on plant names and plant uses in Norway.

Results: More than 200 individual records mention the use of fern rhizomes for fodder in Norway. Only a fraction of these, typically made by botanist recording data on plant uses, provides information on the identity of the species used. Based on these, Dryopteris filix-mas and Matteuccia struthiopteris stand out as the most important species serving as sources of fern rhizomes for fodder. Locally, Dryopteris expansa was the preferred species, and this taxon may to some extent be overlooked in the records so far available. With a few exceptions, Norwegian folk tradition singles out Athyrium filix-femina as a harmful and poisonous species, causing livestock to go blind and lame, but whether this is true or not, remains unknown; the symptoms are in fact documented elsewhere as a consequence of poisoning due to Dryopteris filix-mas. In coastal north Norway, fern rhizomes were regularly collected for fodder, both in late autumn and early spring, and used to remedy a recurrent shortage of fodder in late winter and spring. Locally, the tradition of collecting fern rhizomes lived on until the 1940’s or 1950’s. Although mainly a tradition of the ethnic Norwegians, it had also been adopted by the farmers belonging to the Finnish and Sámi ethnic minorities.

Conclusion: Fern rhizomes have a long tradition as an additional fodder for livestock in Norway. Preferred species were Matteuccia struthiopteris and Dryopteris filix-mas, locally also Dryopteris expansa. Athyrium filix-femina was considered to be poisonous, and usually avoided.