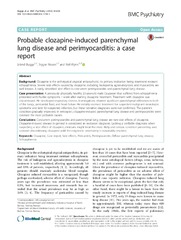 Background: Clozapine is the archetypical atypical antipsychotic, its primary indication being treatment resistant schizophrenia. Severe side effects caused by clozapine, including leukopenia, agranulocytosis, and myocarditis, are well known. A rarely described side effect is concurrent perimyocarditis and parenchymal lung disease.

Case presentation: A previously physically healthy 23-year-old male Caucasian that suffered from schizophrenia presented with flu-like symptoms 1 week after starting clozapine treatment. Treatment with clozapine was discontinued. He developed respiratory distress. Investigations showed significant parenchymal infiltration in both of the lungs, pericardial fluid, and heart failure. He initially received treatment for suspected malignant neuroleptic syndrome and later for suspected infection, but these tentative diagnoses were not confirmed. The patient’s condition gradually improved. In retrospect, clozapine-induced parenchymal lung disease and perimyocarditis were deemed the most probable causes.

Conclusions: Concurrent perimyocarditis and parenchymal lung disease are rare side effects of clozapine. Clozapine-induced disease in general is considered an exclusion diagnosis. Lacking a verifiable diagnosis when suspecting a side effect of clozapine, clinicians might treat the most likely and serious condition presenting and consider discontinuing clozapine until the diagnostic uncertainty is reasonably resolved.