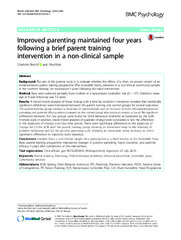 Background: The aim of the present study is to evaluate whether the effects of a short, six session version of an evidence-based parent training programme (The Incredible Years), delivered in a non-clinical community sample in the northern Norway, are maintained 4 years following the initial intervention.
Method: Data were collected primarily from mothers in a randomized controlled trial (N = 117). Children’s mean age at 4 year follow-up was 7.5 years.
Results: A mixed model analyses of linear change with a time by condition interaction revealed that statistically significant differences were maintained between the parent training and control groups for several outcomes. The parent training group showed a reduction in harsh disciple and an increase of both self-reported positive parenting and parental efficacy when compared to the control group who received services as usual. No significant differences between the two groups were found for child behaviour problems as measured by the ECBI Intensity scale. In addition, mixed model analyses of quadratic change were conducted to test the differences in the trajectory of change over four time points. There were significant differences in the trajectory of change for (1) the ECBI with the parent training group showing an immediate drop in the intensity of problem behaviour and (2) the positive parenting scale showing an immediate steep increase; no other significant differences in trajectory were detected.
Conclusions: Families from a non-clinical sample who participated in a brief version of the Incredible Years Basic parent training programme maintained changes in positive parenting, harsh discipline, and parental efficacy 4 years after completion of the intervention.