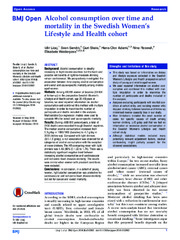 Alcohol consumption is steadily increasing in high-income countries but the harm and possible net benefits of light-to-moderate drinking remain controversial. We prospectively investigated the association between time-varying alcohol consumption and overall and cause-specific mortality among middle- aged women.

Methods: Among 48 249 women at baseline (33 404 at follow-up) in the prospective Swedish Women’s Lifestyle and Health cohort, age 30–49 years at baseline, we used repeated information on alcohol consumption and combined this method with multiple imputation in order to maximise the number of participants and deaths included in the analyses. Multivariable Cox regression models were used to calculate HRs for overall and cause-specific mortality.

Results: During >900 000 person/years, a total of 2100 deaths were recorded through Swedish registries. The median alcohol consumption increased from 2.3 g/day in 1991/1992 (baseline) to 4.7 g/day in 2004 (follow-up). Compared with light drinkers (0.1–1.5 g/day), a null association was observed for all categories of alcohol consumption with the exception of never drinkers. The HR comparing never with light drinkers was 1.46 (95% CI 1.22 to 1.74). There was a statistically significant negative trend between increasing alcohol consumption and cardiovascular and ischaemic heart diseases mortality. The results were similar when women with prevalent conditions were excluded.

Conclusions: In conclusion, in a cohort of young women, light alcohol consumption was protective for cardiovascular and ischaemic heart disease mortality but not for cancer and overall mortality.