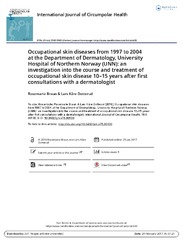 Objectives: We investigate the impact of occupational skin disease consultations among outpatients at the Dermatological Department, University Hospital, Northern Norway.


Study design: From 1997 until 2004, 386 patients with occupational skin disease were examined and given advice on skin care, skin disease treatment, skin protection in further work, and on the legal rights of patients with this disease. Ten to fifteen years later, we wanted to look at these patients in terms of their work situation, the current status of their disease, the help they received from the labour offices, and their subjective quality of life.

Material and methods: In the autumn of 2011 until the spring of 2012, a number of the patients examined in the period from 1997 to 2004 were selected and sent a questionnaire, which they were asked to answer and return, regarding their work situation and the progress and current status of their occupational disease.

Results: A total of 153 (77%) patients answered the questionnaire; 71% of these patients were still in work, and further 15% had old-age retired, 13% were working until then; 16% had retired early because of disability; 54% had changed jobs because of their occupational skin disease; 86% of the patients indicated that the skin disease had improved since our previous investigation.

Conclusions: Our investigation into patients with occupational skin disease documented that the majority of patients who had received professional dermatological consultation and intervention offers were still in the labour market and had good control of their skin disease 10-15 years later. We discovered that 71% of the patients were still employed. 13% had remained in work until they became old age pensioners. Only 16% dropped out of work because of disability. These high percentages may indicate that our intervention has contributed positively to patients’ work conditions and the course of their skin disease.