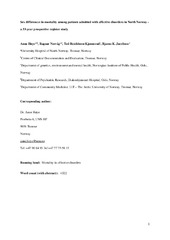 Objective: Previous studies from North Norway showed signiﬁcantly increased mortality in patients with schizophrenia and personality disorder. The aim of the present study was to investigate total and cause- speciﬁc mortality in inpatients with aﬀective disorder in a 33-year follow- up cohort, with a speciﬁc focus on sex diﬀerences.

Methods: Based on a hospital case register covering all admissions to psychiatric hospital in the two northernmost counties in Norway from 1980 to 2012, 790 men and 866 women with major depressive disorder and 331 men and 514 women with bipolar disorder were included. The cohort was linked to the Norwegian Cause of Death Registry. The relative mortality in men compared to women was tested using Cox regression with attained age as the time variable. The standardized mortality ratio (SMR) of the patients when compared to the general population in Norway was calculated.

Conclusions: The substantially increased mortality in patients with aﬀective disorders in Norway has been persistent over a period of 33 years, despite extensive reforms in psychiatric health care. Indications of increasing SMR for suicide in women call for further research.