Who are the users of a traditional Chinese sanfu acupoint herbal patching therapy in China? A cross-sectional survey 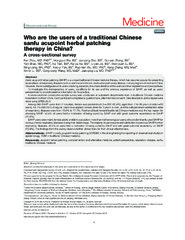