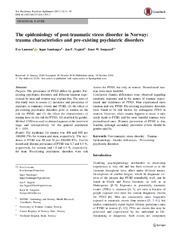 Purpose: The prevalence of PTSD differs by gender. Pre-existing psychiatric disorders and different traumas experienced by men and women may explain this. The aims of this study were to assess (1) incidence and prevalence of exposure to traumatic events and PTSD, (2) the effect of pre-existing psychiatric disorders prior to trauma on the risk for PTSD, and (3) the effect the characteristics of trauma have on the risk for PTSD. All stratified by gender.

Method: CIDI was used to obtain diagnoses at the interview stage and retrospectively for the general population N = 1634.

Conclusion: Gender differences were observed regarding traumatic exposure and in the nature of traumas experienced and incidences of PTSD. Men experienced more traumas and less PTSD. Pre-existing psychiatric disorders were found to be risk factors for subsequent PTSD in women. However, while trauma happens to most, it only rarely leads to PTSD, and the most harmful traumas were premeditated ones. Primary prevention of PTSD is thus feasible, although secondary preventive efforts should be gender-specific.