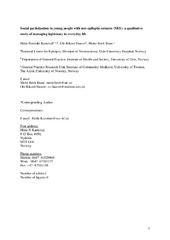 This qualitative study explored social participation in young people with nonepileptic seizures (NES), particularly how legitimacy of illness is managed in everyday life.
Young people with NES, all female and aged between 14 and 24 years (N = 11), were interviewed and followed up over a 14-month period. The transcripts were analyzed using thematic analysis.
Four main themes were elaborated: 1) Delegitimizing experiences from families, schoolteachers, colleagues, and employers were part of everyday life. 2) Fear of being exposed to delegitimizing events resulted in the young people trying to conceal the diagnosis; for some, this resulted in isolation from all social arenas, apart from their closest relationships. 3) Support from close relationships was protective against delegitimization and contributed towards greater social participation. 4) Perceiving NES as a legitimate disorder contributed to increased social participation.
We found a relationship between legitimacy of illness experienced by the participants and the extent to which they either participated or retreated socially. Those who had an illness perception that was personally meaningful experienced their condition as being more legitimate and participated more socially.