Mobility as a predictor of all-cause mortality in older men and women: 11.8 year follow-up in the Tromso study 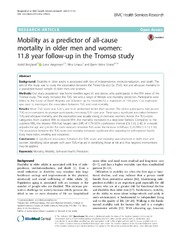 Background: Disability in older adults is associated with loss of independence, institutionalization, and death. The aim of this study was to study the association between the Timed Up and Go (TUG) test and all-cause mortality in a population-based sample of older men and women.

Methods: Our study population was home dwellers aged 65 and above, who participated in the fifth wave of the Tromsø study. This study included the TUG test and a range of lifestyle and mortality predictors. Participants were linked to the Cause of Death Registry and followed up for mortality for a maximum of 11.8 years. Cox regression was used to investigate the association between TUG and total mortality.

Results: Mean TUG score was 12.6 s, and men performed better than women. The oldest participants had poorer TUG score compared to younger participants, increasing 0.25 s per year. There was a significant association between TUG and all-cause mortality, and the association was equally strong in men and women. Across the TUG-score categories, from quickest fifth to slowest fifth, the mortality increased in a step-wise fashion. Compared to the quickest fifth, the slowest fifth had hazard ratio (HR) of 1.79 (95% confidence interval (CI) 1.33, 2.42) in a model adjusted for age and gender. For each standard deviation TUG-score the increase in HR was 1.23 (95% CI 1.14, 1.33). The association between the TUG score and mortality remained significant after adjusting for self-reported health, body mass index, smoking and education.

Conclusions: A significant association between the TUG score and mortality was observed in both men and women. Identifying older people with poor TUG may aid in identifying those at risk and thus targeted interventions may be applied.