Democratic Deliberation in the Context of Deep Pluralism and Mass Democracy. A Case for an Epistemic Idea of Public Reason 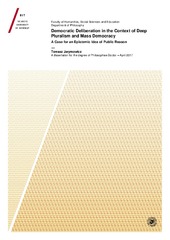 This doctoral dissertation’s aim is to answer the question of how citizens should talk to each other about matters of public interest in the context of deep pluralism and mass democracy. Specifically, I advocate a strong moral basis of equal respect as a guiding norm in democratic deliberation. This guiding norm entails an epistemic idea of public reason that can make sure that democratic procedure can be judged according to whether the preferences and interests of all the affected are reflected in democratic outcomes for good reasons. I present the conflict between pure proceduralists who have no standard other than procedure itself to judge the democratic outcomes and deliberative democrats who can judge them based on ideal procedure. I argue that deliberative democrats’ account answers to the fact of deep pluralism and mass democracy better given that it has a promising epistemic element in it. However, in my opinion this element is too weak to make a non-trivial difference in comparison with pure proceduralism. Consequently, I advocate a procedure based on substantive and procedural idea of equal respect. The substantive dimension of equal respect is transformed into a moral standard whose task is to increase the possibility for democracy to give epistemically better results. The procedural part of equal respect ensures that this moral principle is not perfectionist. Since such a procedural account may be considered too demanding, I also make a case for a deliberative activism within deliberative system. Such activism combines deliberative capacity with contestation, which allows it to reconcile equal respect with the conditions of mass democracy and deep pluralism. This way moral principle of equal respect is put into a the systemic context.